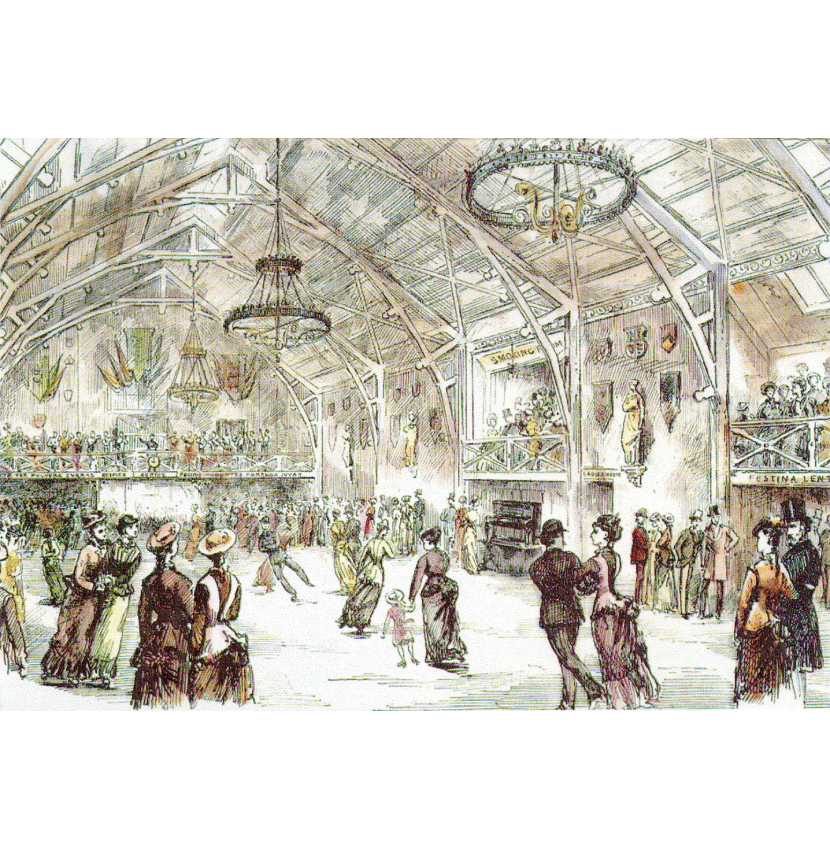 The South Asia Collection Museum is housed in an architectural gem, a Grade II listed Victorian roller-skating rink. When you come to visit us, you can look up and marvel at the high barrel vaulted wooden roof, spot the original viewing galleries where gentlemen and ladies watched the skaters on the bitumen covered floor below, and pass the place where a small organ provided musical accompaniments to the roller skaters in their suits and wide hemmed dresses.

In 1876, local solicitor Warner Wright built The Old Skating Rink at a cost of over £9,000. It opened in September, with up to 500 skaters attending a day. By winter, numbers were falling. In September 1877, the building was converted into a theatre of varieties with roller skating in the intervals. In October, it was sold at a great loss for £3,400. Up until early 1880, it continued as a place for variety entertainments (plays, operettas, performing dogs, trick cyclists and marionette shows) alongside roller skating.

In its next incarnation, the building was expensively fitted out as a store for American meat and other tinned food. But it never opened.

Between 1882 and 1892 The Salvation Army used the building for their meetings. A highlight was the visit of General Booth, founder of the Salvation Army in 1882, who addressed a huge congregation from the balcony, where you can still stand today. The Salvation Army could not afford to purchase the building, and by the time they moved to St. Giles St in October 1892, the Old Rink had fallen into disrepair.

In 1898, the firm Lacey & Lincoln, famous in Norfolk for their brick kilns and builder’s merchants, acquired the Old Skating Rink. For just under a hundred years, the building was used as a warehouse and drive through store, until 1993, when they ceased trading.

It was on 22nd October 1993, that Philip and Jeannie Millward (founders of Country & Eastern) acquired the building. The Old Skating Rink finally gave them space to display their private collection of the arts and crafts of South Asia to the public. In 2010 the South Asian Decorative Arts and Crafts Collection Trust (SADACC) was founded to record, conserve and promote the arts, crafts and cultures of South Asia and neighbouring countries. From 2015, SADACC has set out to become a leading research centre for the arts and crafts of South Asia.

The Old Skating Rink, which was built as a place of entertainment, is once again a space to come and explore and discover: home to regularly changing exhibition and gallery spaces, permanent collection areas, and, of course, the fabulous shop.