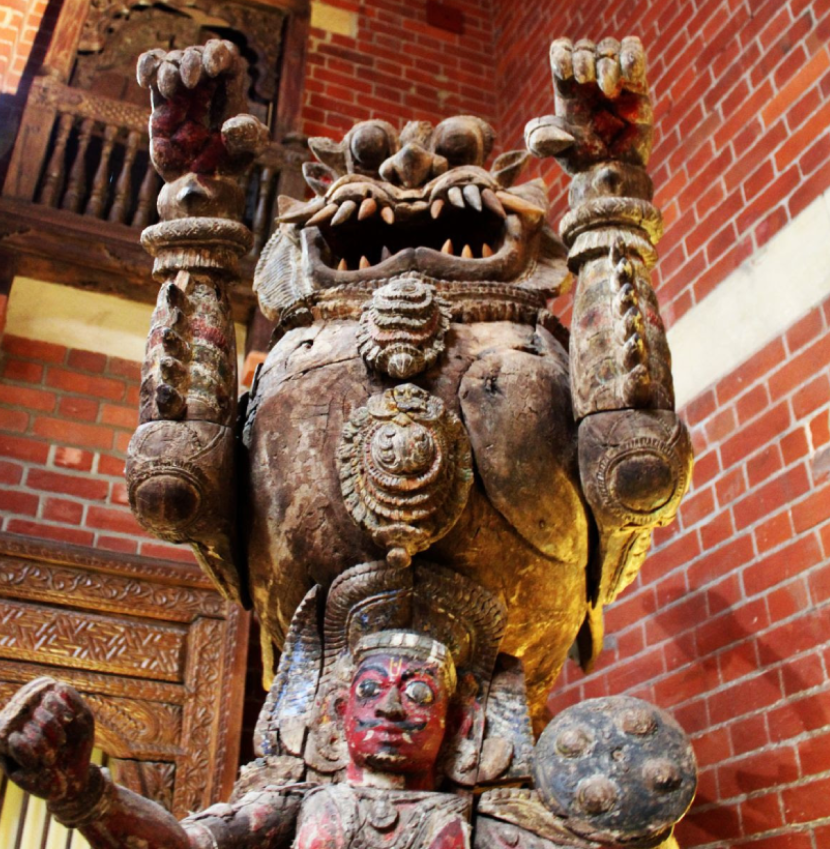 Sharabha is an avatar of Shiva, part-lion and part-bird, that is usually only found in southern India. It is believed to be the most powerful incarnation of Shiva. In Shaivite Hindu mythology, Shiva takes the form of Sharabha to subdue Narasimha (an avatar of Vishnu). In this sculpture, Vishnu can be seen beneath Sharabha’s claws.

Left: Lord Sharabha on display in the Museum. Below: Lithograph depicting Vishnu as Narasimha.

The story of Vishnu’s incarnation as the half-human half-lion, Narasimha, appears in the Padma Purana. While Shiva’s incarnation as Sharabha is recorded in the Shiva Purana. These holy texts are dedicated to different deities, and the two halves of the story are told from different perspectives.

In the Padma Purana, the demon Hiranyaksha carries the earth to the underworld. To save the planet, Vishnu takes the form of Varaha, the divine boar, and fatally stabs Hiranyaksha with his tusk. But Hiranyaksha had an elder brother, the king Hiranyakashipu. When Hiranyakashipu discovered his brother had been killed, he prayed to Lord Shiva, who was so pleased with this act of penance that he granted Hiranyakashipu immortality.

Later, King Hiranyakashipu had a son, Prahlad, who chose to worship Vishnu. Hiranyakashipu was incensed. How could his son worship the deity who had killed his brother? Hiranyakashipu set out to stop his son, then, when he saw he could not, he vowed to kill him.

Lord Vishnu vowed to protect Prahlad. But Shiva had given Hiranyakashipu the power of not being killed by a human or animal or by any weapon. So, Vishnu transformed himself into half-lion half-man; not quite human, not quite animal, and he killed Hiranyakashipu, ripping into his stomach with his claws. Prahlad was safe and became ruler of his father’s kingdom.

But Narasimha’s anger could not be sated. In some versions of the story, it is Prahlad who finally calms him. But in the Shiva Purana, even Prahlad could not stop him. The other gods turned to Shiva for help. After two unsuccessful attempts to calm the anger of Narasimha, Shiva turns himself into his most devastating form, Sharabha – a huge and terrifying man-eating bird. He knocked Narasimha down with his giant wings and carried him off. Narasimha became so afraid he passed out, turning back into Vishnu – in the form we can see here in the sculpture, kneeling under Sharabha’s paws. Afterwards, Narasimha praised Shiva. In this version of the story, Shiva took his skull and added it to his necklace of heads.

This large figure of Lord Sharabha and Narasimha is probably from the top of a juggernaut cart that is pulled through the streets during a religious festival.