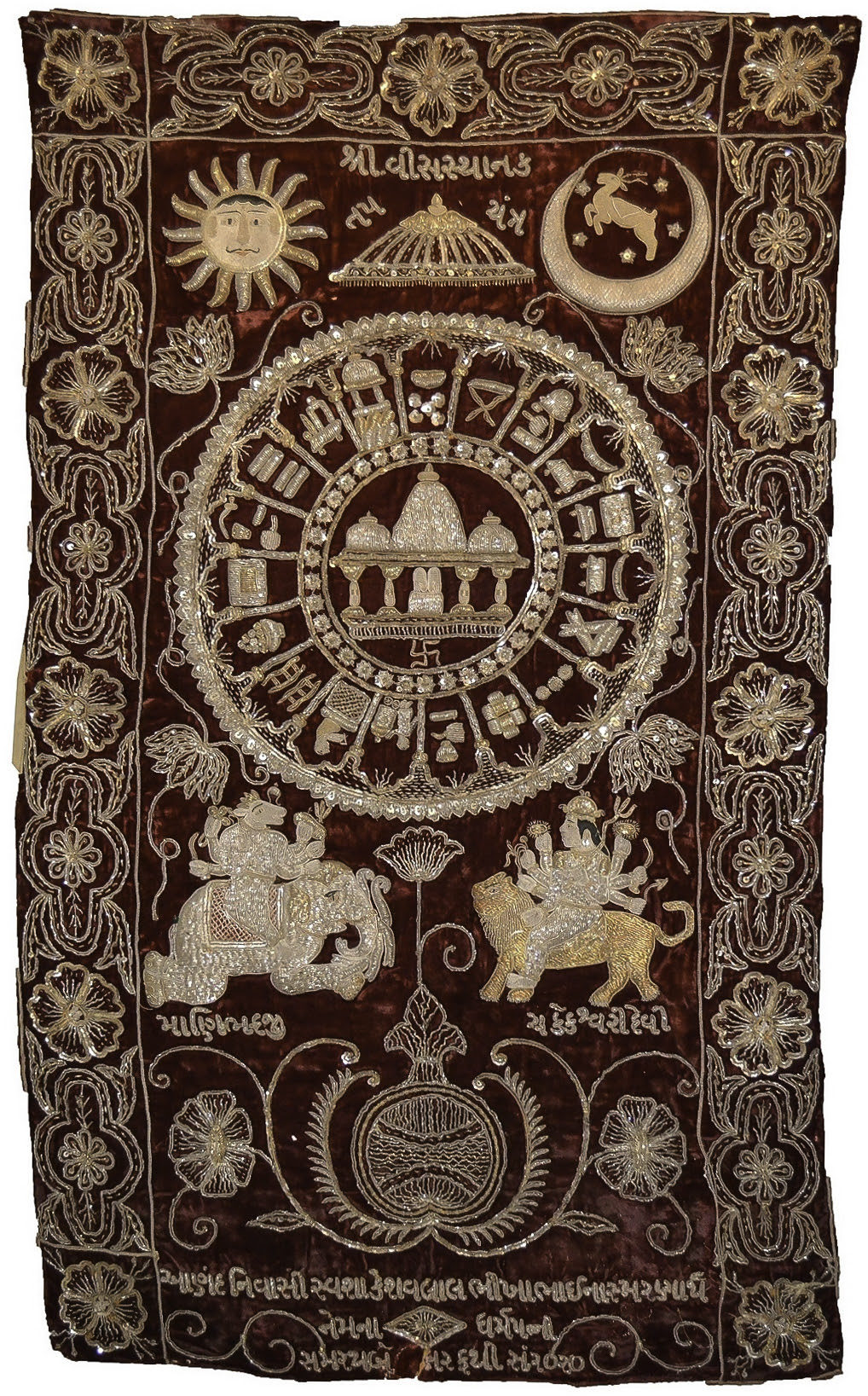 This temple hanging is from Gujarat in Northwest India. It has been made using a form of embroidery called zardosi work. A red velvet cloth has been densely stitched with gold and silver threads and embellished with sequins.
Temple hangings and their symbols are an important part of Jain worship. This one was made in 1963 as an offering to a temple. When the need arises hangings such as these are sold to raise funds for the temple and often, due to the gold and silver thread content, they are sold by weight.

For Jains the spiritual goal is to obtain moksha, a state of freedom and purity. Jains believe that all living organisms, however small, have a soul, and that negative actions, such as greed or violence, cause the soul to be trapped in a cycle of rebirth. A key concept of Jainism is Ahimsa, which means ‘non-injury’. Jains are strictly vegetarian and avoid activities or professions that may lead to harming living beings.

At the heart of the hanging is a Jain yantra: a circular diagram to help devotees focus their mediations. At its centre are a temple and a svastika – an auspicious Jain symbol representing the four states of existence.
The surrounding 19 sections contain symbols denoting aspects of Jain faith. For example, at the bottom right are three dots representing the guiding principles of Jainism, called the three jewels: right belief, right knowledge and right conduct.  Amongst the other sections are monastic objects, such as brooms, a raised seat to preach, and a folding bookstand for manuscripts.

Jains venerate 24 Jinas (also called Tirthankara): perfect beings and teachers who have achieved moksha. Many Jains also worship yakshas: gods and goddesses who protect the Jinas. Yakshas, who can influence everyday matters such as health, wealth and fertility.
At the top are Surya the sun god, and Chandra the moon god, whose chariot is drawn by an antelope. Near the bottom are two popular yaksha: Manibhadra, the protector, riding Airavata, the king-god of elephants shown with seven trunks and Cakreśvari (also called Apraticakra), the goddess of teaching, riding a golden lion.