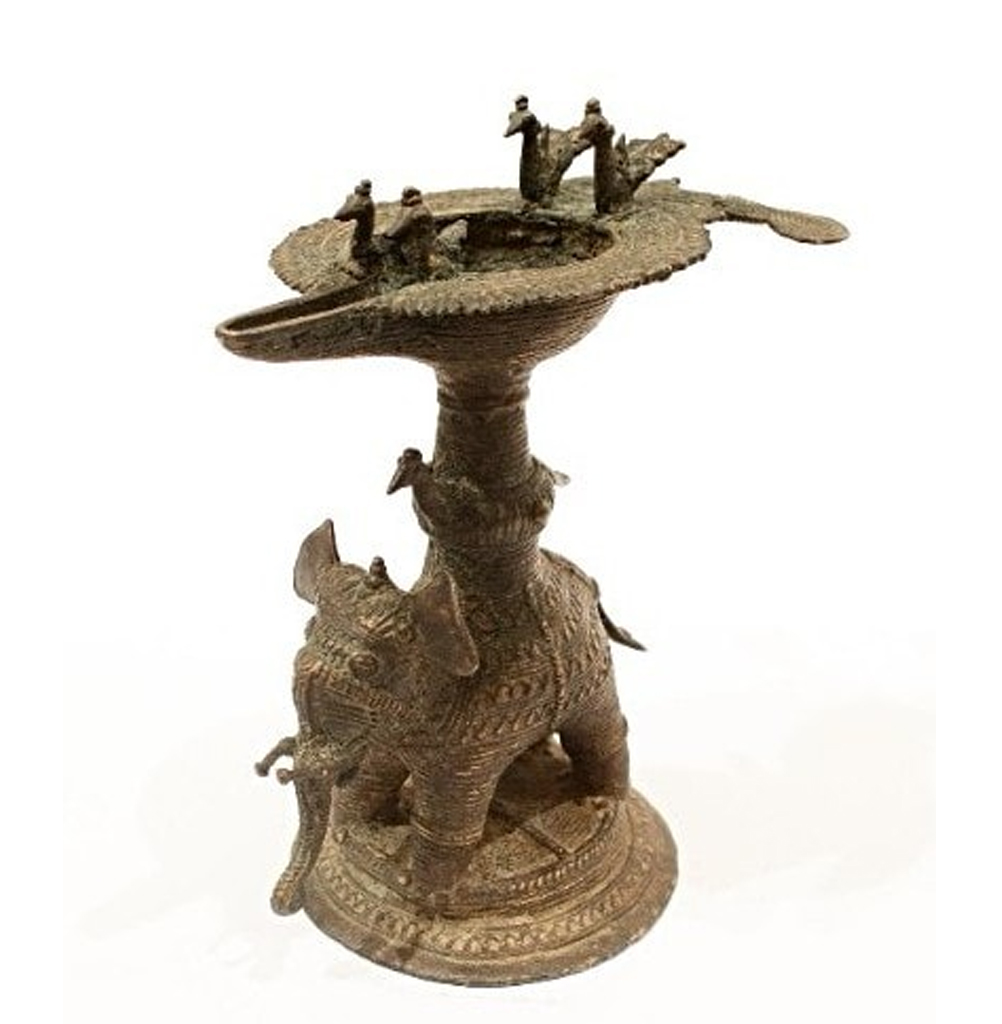 Oil lamps have a significant role in the Hindu religion and are found both at home and in Hindu temples. Single wick lamps, such as this, are commonly used for puja (worship) in the family home. Every morning these lamps are lit using ghee, or oil, and a cotton wick, in the belief that the illumination from the lamp removes darkness and ignorance and in burning upwards the light reflects the attainment of knowledge. The light from the flame also allows the worshipper to see their god more clearly as the lamp is usually lit alongside an image of the deity. Some also believe that the oil or ghee represents negative energy and the wick, the ego. In lighting the lamp, the ego and negative spirits are removed from the soul.

This oil lamp from Odisha is made by a lost-wax casting process, known as dhokra, a traditional craft of the eastern region of India. It is a craft practice that is said to date back over 4000 years. This particular example of dhokra is a hollow wax casting. A clay core is wrapped with thin wax strips, which are carefully sculpted to create a design. The wax strips are then covered with another layer of clay and holes are left for the wax to drain away when the clay is fired. Molten metal is then poured into the clay mould forming the cast. As the clay must be broken to remove the cast each piece of dhokra art is unique. Oil lamps, deities, ornamental figures, jewellery and domestic measuring pots are all commonly made using the dhokra process.

Dhokra is instantly recognisable from the unique appearance caused by the wax strips used in the production process, although different regions have variations of style. For example, on a similar lamp from Bastar the elephant would be more elaborately decorated, with a longer trunk and larger ears. Craftsmen in Odisha use a particular three-part tool called a nahalo, janta and choki to create the design and combine the lac from the sal forests with beeswax to form the wax strips.

In recent years the art of dhokra has reached the international commercial market. However, this particular lamp is an example dating from the mid 20thcentury and would have been made for the domestic market to be used in a shrine at home.

This lamp, the puja pots and deity figures can all be seen on display at The South Asia Collection in our most recent exhibition case, Indian Deities and Ritual Objects.