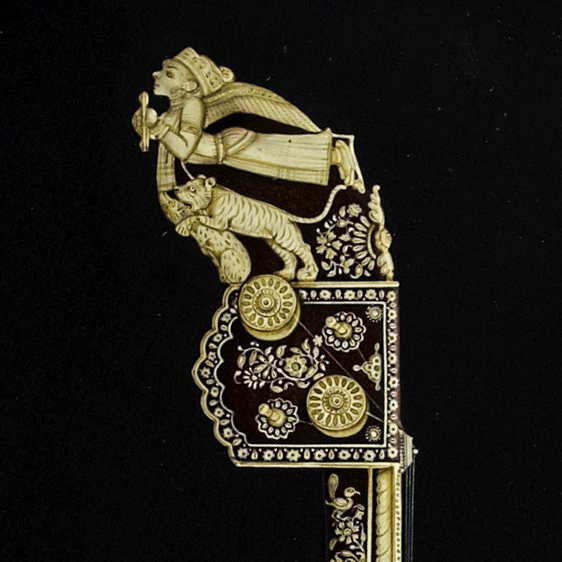 This month we look at two miniature paintings currently on display together.

Miniature artist Ramesh Sharma ran an atelier in Jaipur, Rajasthan. He was recognised as one of the best Indian miniature painters of his time. As a master painter, Sharma taught generations of artists through traditional methods; making papers, mixing paints and training in line and colour work.

As a child, Sharma accompanied his father to work at the City Palace Museum, Jaipur. Sharma spent his days sitting in front of the cabinets sketching the objects. He remembered many made of gold, silver and rich textiles and described them from a child’s eye as appearing to float, suspended in mid-air.

This miniature painting depicts five Hindu gods, including Ganesha and Vishnu. The inscription below is in Punjabi and comes from the Ashvamedha Parva, the 14th book of the Sanskrit epic, the Mahabharata.

The artist was Rama Misra (an inhabitant of Kashmir), and it was possibly painted in a place called Mahalmalikpur in the Samvat year of 1748 (circa 1691-1692 AD).

Both pictures can be seen on display at The South Asia Collection, alongside 19th century company school miniatures from Patna.