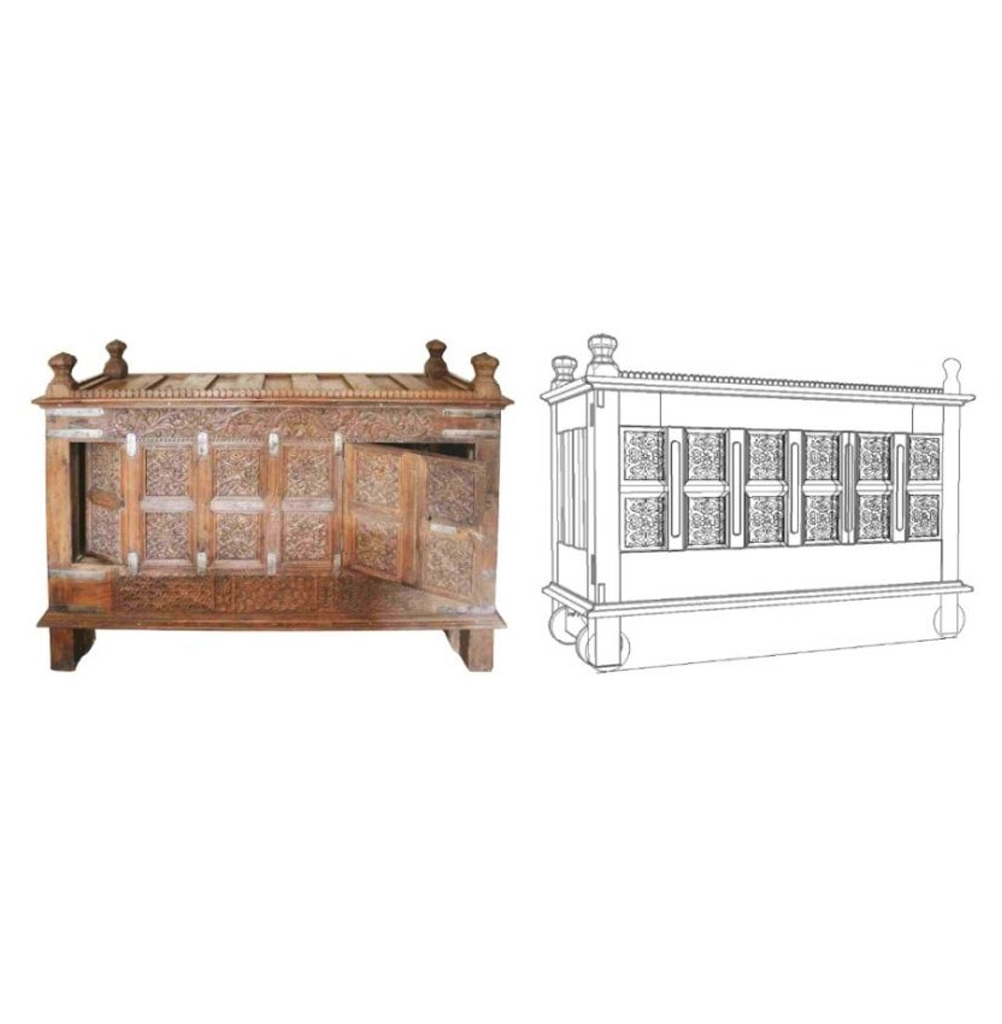 Here, at The South Asia Collection we are big believers in the need to be continually learning about the objects in our care. Many of you will know that we are involved in the Vernacular Furniture of North-West India project, in collaboration with DICRC, CEPT University, Ahmedabad. Some of you will know that our first book Sahaj: Vernacular Furniture of Gujarat was just last week launched in front of a crowd of thousands in Ahmedabad, with the Chief Minister in attendance. The reception in India has been wonderful, with articles and features in a number of leading magazines and newspapers.

Less of you will know that our Collection Curator Ben Cartwright has been hard at work with two visiting Research Fellows, Samrudha Dixit and Mansi Sathyanarayan on the follow-up to this book, which focuses on the vernacular furniture of Rajasthan. In this object of the month we want to revisit the majju (cabinet) which was featured as an object of the month in November 2017. There is a good reason for this.

In 2017 we wrote about how conducting fieldwork in the Vagad region of southern Rajasthan allowed us to learn more about majju. For example, we had initially thought it was called a ‘Banswara chest’.

… labelled ‘Banswara chest’. But there was little way of knowing whether that was actually what they were called in the homes where they were used. There were no books, no articles to refer to. The only way to find out more information was to go to the region and hope to meet the people who made and used this type of cabinet. Following a lead, they (the fieldwork team) drove towards a particular village, though a dry stony valley, the small wheat fields separated with banks of heaped earth where wild peacocks would stand and survey the scene.

Well, it is nearly a year on. We have documented majju across Vagad. We now know that their name is majju, and not Banswara chest. They are located in the Banswara and Dungarpur districts that make up much of the Vagad region. They were used for storing valuables such as jewellery and textiles. There are two main forms which can be broadly categorised by their decoration, whether that be with carved horse heads or finials (as in the above picture)… and so on.

One of the most intriguing aspects of this form of cabinet is its use as a safe box. Within the interior storage areas of each majju are several hidden compartments accessed through secret entrances that need wedges removing, latches lifted, parts unscrewed or removed. This complex procedure must be undertaken in sequence, starting with the main opening, and finishing with the last and smallest hidden compartments.

Because many majju are still used to store valuables, only in rare instances were we invited to document this process from start to finish. And where we were, there were often time and other practical constraints. One of the great advantages of working with a museum collection as part of this project is being able to spend unlimited time studying items of vernacular furniture now cared for in Norwich. This is where Samrudha Dixit has been very active over the past few weeks.

Samrudha Dixit has been helping us to document this knowledge. Alongside field recordings and interviews he has been making detailed technical drawings of a number of majju that are crucial in helping us to understand how they were constructed. In these drawings we can begin to understand the complex vision of the suthar who made these cabinets. For the first time we can see how they were put together by the craftsperson.

This is painstaking research – Samrudha, Mansi and Ben have been measuring, photographing and sketching, and discussing a wide array of topics from tenon joints to carved finials to the traditions of carpenter client relationships in southern Rajasthan.

To get some idea of the level of information we now have on this form of cabinet, lets return to the majju pictured at the start of this object of the month.

If you’d been watching the team at work, you would have seen Mansi, Samrudha and Ben slowly opening this majju compartment by compartment (this often involved very delicate work deep inside the body of the cabinet). In total there were 16 compartments and a hidden shelf! Of note, was that most majju usually have a compartment that pops out of the bottom rail. This majjuhad a fake compartment in the bottom rail – it looked like it was there but did not open – hiding more secret compartments beneath the floor of the main storage area. This was one of the largest majju documented in the survey. It would have been made in the mid-twentieth century (the carpenters who made these cabinets are no longer living). The floral carvings in the panels, were related to others we have documented, and designs on other architectural forms – all of which contributed to a particular aesthetic whole in Vagad. We still have unanswered questions. Some of the joinery techniques and other features are not traditional, why was this? The reason for their choice may appear random, but we are hoping that a pattern will emerge with further enquiry.

Samrudha Dixit has been awarded a Charles Wallace India Trust/Simon Digby Memorial Charity scholarship to spend time at The South Asia Collection working on the techtonics of majju. In other words, a deep investigation of how a majju is put together, and how the opening sequence works.

Fieldwork in Rajasthan was wrapped up at the end of last year. Some of the initial findings are currently on display in the exhibition Vernacular Furniture of Rajasthan.