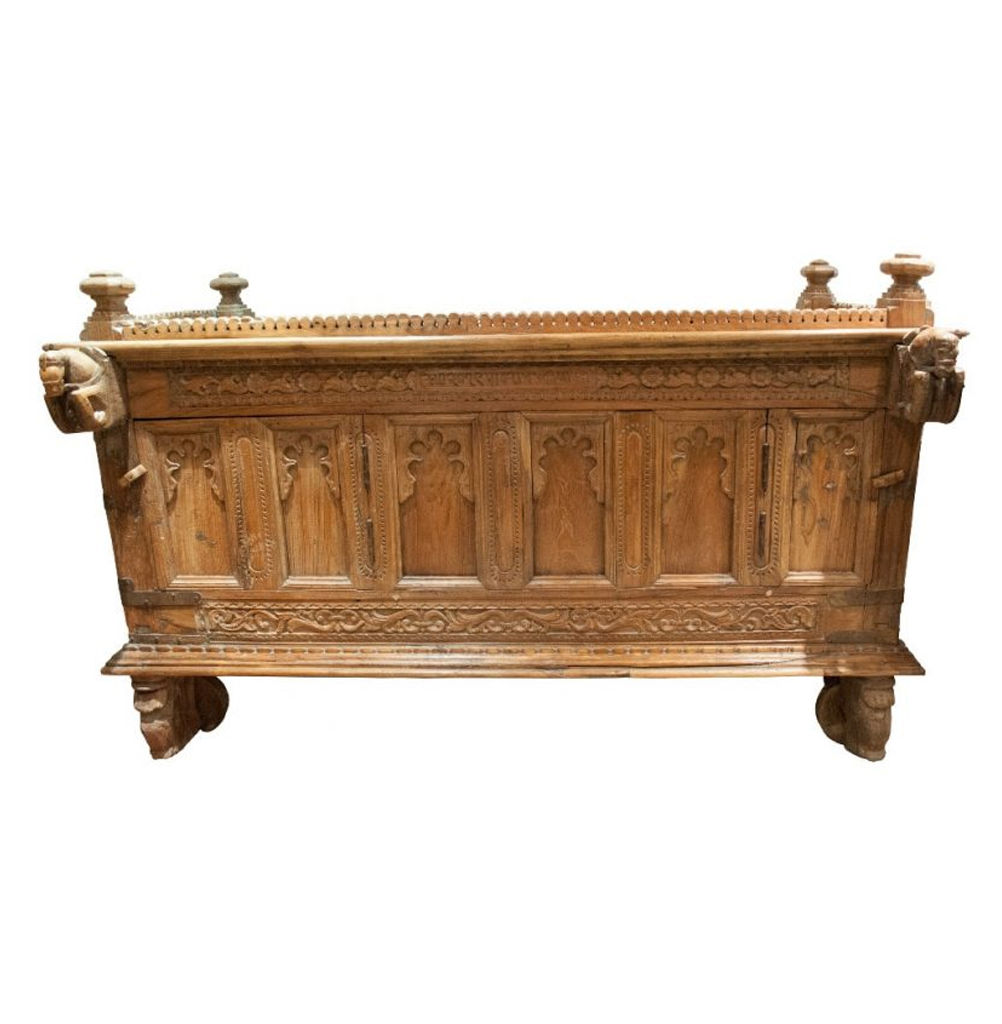 This majju (chest), currently on display at The South Asia Collection, comes from the south of Rajasthan. The inside of the chest is a series of secret compartments, with hidden latches and openings. It was in these majju that families in the south of Rajasthan stored their valuables. Until earlier this year, the museum record at The South Asia Collection simply read: Carved Chest with Horse Decoration Banswara Southern Rajasthan.

We have been learning a lot more about majju like this one on fieldwork in Rajasthan, as part of Phase II of the vernacular furniture of north-west India project SADACC is currently conducting in collaboration with DICRC, CEPT University Ahmedabad.

The original museum record at The South Asia Collection mentions that this form of vernacular furniture was thought to come from Banswara (an old princely state now incorporated into the far south of Rajasthan). As such, it and others like it were labelled ‘Banswara chest’. But there was little way of knowing whether that was actually what they were called in the homes where they were used. There were no books, no articles to refer to. The only way to find out more information was to go to the region and hope to meet the people who made and used this type of chest. But there were, as we had learned in the study of vernacular furniture in Gujarat, no guarantees that we would find such chests in-situ, or that there would be anyone alive who could remember how they were made or why they were.

And so, in March of this year the fieldwork team (including Ben Cartwright our Collection Curator and Mansi Sathyanarayan, whom many of you will have heard speak at The South Asia Collection when she visited in June) travelled to southern Rajasthan. It was one of the areas the fieldwork team had yet to visit, having already covered hundreds of miles between villages, towns and cities, trying to document vernacular furniture pieces and record the stories bound up in their manufacture and daily use. Following a lead, they drove towards a particular village, though a dry stony valley, the small wheat fields separated with banks of heaped earth where wild peacocks would stand and survey the scene.

In the village, the team were shown around by a man of the Suthar caste (Suthar translates as carpenter). Although he was now a schoolteacher, he still actively practiced the skill his father had taught him (later we were shown the modern furniture – tv cabinet, coffee table – he had made at his home). Walking through the village with him, we saw a number of chests, which we quickly learned were called majju, and talked to the owners.

In the past, families and their carpenters had a special bond, a lifelong relationship. If a carpenter knew there was to be a wedding, be made a gift of a charpoi for the family, if he heard of a pregnancy, it was a ghodiyu (cradle) that he made and gifted. Larger household furniture and woodwork was commissioned. The carpenter and the head of the household would plan the majju; coming up with new designs for carved ornamentation based on the other woodwork in the village that they wanted to better.

Only the carpenter and the head of the household would know the secret of the complex system of secret compartments and opening techniques. This knowledge was passed down at the time of death. In one house, the descendants had no idea what was in their majju. A sudden death having robbed the family of the knowledge of how to open the chest. Why did they keep the majju if they could not open it? The answer was pride. They enjoyed the beauty of the chest and the link to their heritage. Their small grandson had recently cleaned the majju with a toothbrush!

The same could not be said for all households. Many families had given in to the cash offers of dealers and sold the chests on. It is becoming harder and harder to find some items of vernacular furniture in-situ, and, as a result, more difficult to learn about the stories bound up in their manufacture and use. Household practices are changing. Majju are no longer the best means to store valuables – a metal safe will do that. The carpenters are no longer being asked to make these fascinating chests.