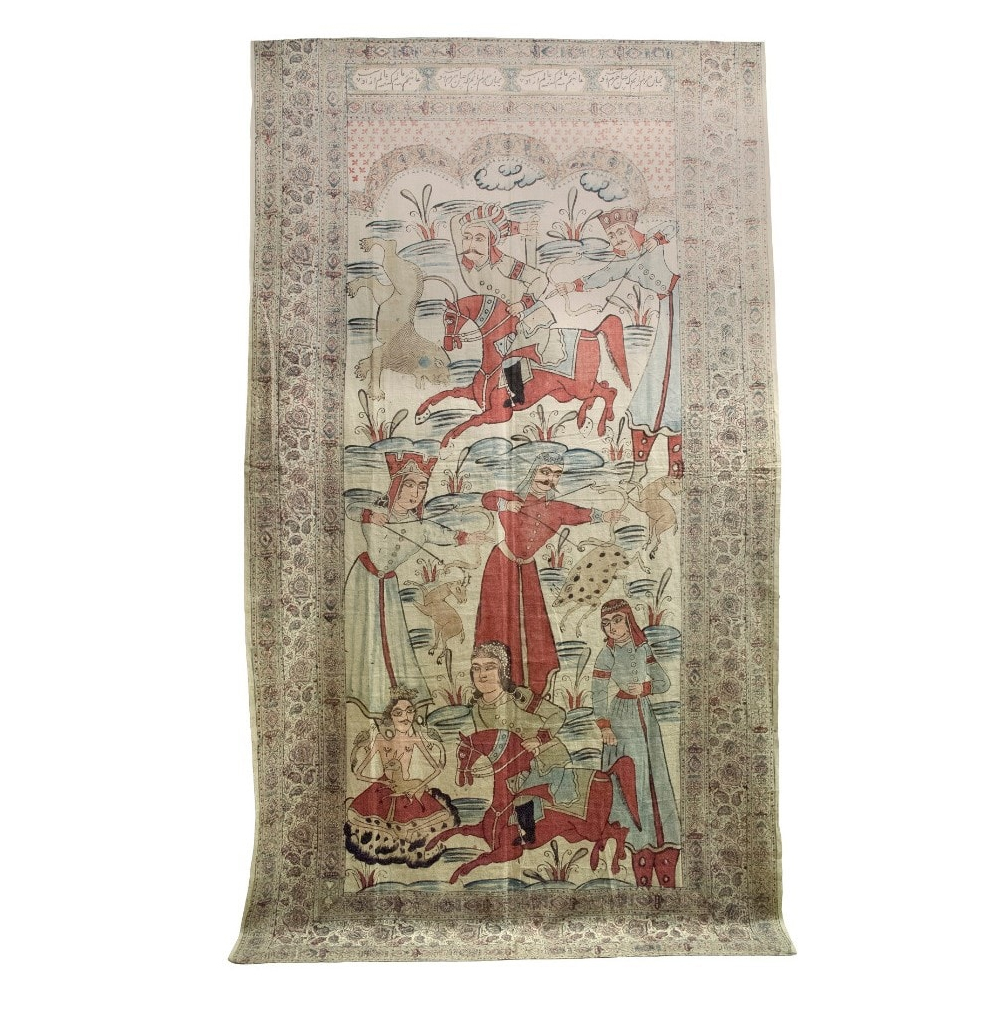 Kalamkaris originated in Persia (present day Iran) where qalam meant pen and kari meant craftwork. Originally the design was hand drawn onto the cotton cloth using a bamboo pen. But during the 19th century when demand and exports increased, block printing techniques became widely used. Often a combination of block printing and penwork was incorporated into kalamkari production. This example, dating from the late 19th century, has a block printed border whilst the central panel, depicting hunting scenes, is hand drawn.

Wooden print blocks are made from seasoned teak wood.  A paste is applied to the surface and allowed to dry. A pattern is then traced onto the wood. The motifs usually consist of leaves, flowers or figurative designs. The negative pattern is cut out using a chisel. Manually operated hand drills are also used. It takes about one week to carve a set of five blocks.

Kalamkaris can vary in design. Some are figurative, some depict the tree of life and others feature repetitive floral motifs and a central lotus flower. The design is often indicative of the region where a kalamkari has been made.

Typically produced on cotton cloth, kalamkaris use only natural colours or vegetable dyes. For many centuries, vegetable dyed textiles were traded between Persia and the Machilipatnam region of India.

As part of the production process, myrobalan nuts are soaked, crushed and used to make a filtered solution for treating the cotton cloth prior to printing. A mordant is also prepared for fixing the dyes: alum is dissolved in water to produce a colourless solution, which is then made viscous by the addition of a gum. Pigments such as iron (black), alizarin (red/orange/pink), babol tree bark (brown), indigo (blues), pomegranate shell (yellow) and a mixture of indigo and pomegranate (green) are mixed with rice starch to create colours for the printing process.

In recent years, the increased cost of raw materials and dyes has exerted pressure on this process and fewer craftspeople continue with traditional methods. However, Machilipatnam remains the predominant area for kalamkari production in India, most typically tree of life kalamkaris.

This Persian kalamkari can be seen on display at The South Asia Collection in the new Printed and Painted Textiles exhibition.