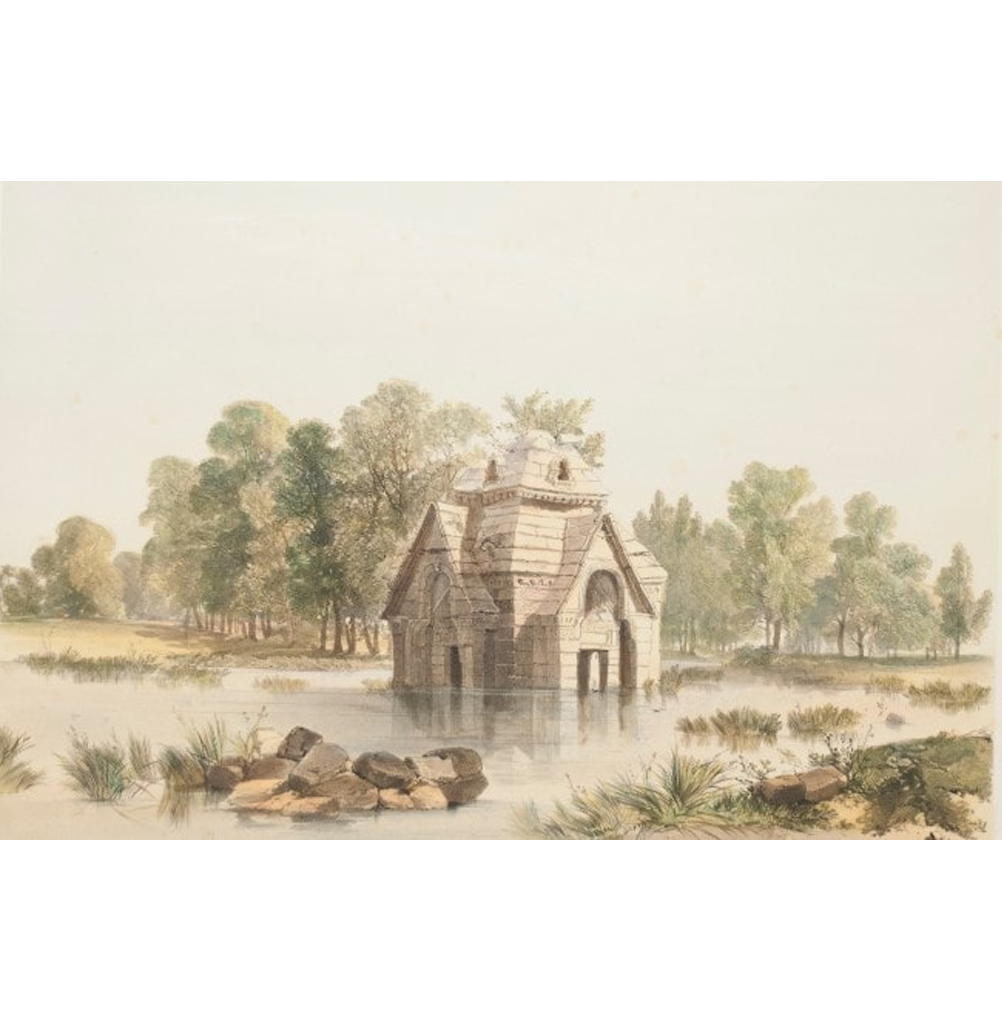 The Object of the Month for June 2018 is the tinted lithograph, Ancient Temple, Pundruttun, by Mrs H. Clark, which is currently on display at The South Asia Collection. It was printed by J. Needham on behalf of Day & Son as part of a set of twelve prints entitled: Summer Scenes in Kashmeer. Although we have some information about this print, the identity of the original artist, Mrs H. Clark, has been a mystery we have been trying to unravel.

We know, for example, about the printing method – the ink was applied to the paper via a chemically etched stone. We also know that Ancient Temple, Pundruttun (present day Pandrethan in Kashmir), is the temple of Shiv-Rilhanesvara, dating to the 10th century CE. Dedicated to Shiva, this temple sits in a water tank fed by natural springs. By the time this image was produced, the water had risen to cover the lower levels. In the print the floors between the arches are submerged. In the late 1860s, around ten years after this lithograph was produced, the Archaeological Survey of India surveyed the inside of the temple using a small boat. They were impressed with the carving of the stone, which included figures in relief and lotus flowers.

So, who was Mrs H. Clark? She could have been Anne Fenn Clark, wife of Hezekiah Clark, an Assistant Surgeon in the East India Company employ. They were married at St Giles’ Church, Camberwell in 1820. The military records for the East India Company record Hezekiah’s job transfers over the next few years. In 1821, he was with the 3rd Battalion of Artillery in Bengal, and in 1824, Hezekiah was at Goruckpore (now in Uttar Pradesh). In the British Library there is a watercolour, titled The Parsonage Gurukhpore, dated 1823 and signed ‘H.C’.

Their son, James Fenn Clark, born in 1823, wrote a diary about a visit to his parents in the 1840s (he spent his childhood with relatives in England). By this time, Hezekiah was working for the Bengal Medical Service, and James (also in the medical profession) writes about ward visits, the threat of the coming change in the weather and the school established for local boys (whom James praises for being more intelligent than those in England). James seems to have inherited other traits from his parents. He was a skilled painter, travelled extensively, and made collections of objects (many of which went on to play an important role in the Leamington Spa Art Gallery & Museum). Hezekiah, we are told, collected flora and fauna, and later became intrigued by geology. These snippets of information might give us some insight into the personal life of Mrs H. Clark.

Finally, it is important to consider the timing of the publication of Summer Scenes in Kashmeer; 1858 was the last year of the Indian Mutiny/War of Independence. In Britain, stories and images of this conflict had piqued a major interest in India. It is possible that Day & Son were hoping to cash in on this interest by providing a wide range of material on India. Summer Scenes was advertised in The Publishers’ Circular under ‘Christmas Presents: Illustrated and Illuminated Works’ where it appeared alongside other volumes, such as Curry and Rice; or, the Ingredients of Social Life at “Our” Station in India by Captain George F. Atkinson; The Campaign in India – 1857-58: The Military Operations before Delhi by Captain Atkinson; and Sketches and Incidents of the Siege of Lucknow by Lieutenant Clifford M. Mecham with descriptive text by George Couper, Esq.

If Mrs H. Clark was Anne Fenn, she would have been in her late 60s in 1858 and had retired to Leamington Spa by this time. This makes it difficult to date exactly when the original image of the temple at Pundruttun, that would have been supplied to J. Needham, was created. We will go on researching Mrs H. Clark. If you have any information please get in touch.

Here, at The South Asia Collection, we have been busy working on a new gallery space dedicated to 19th century paintings and prints of South Asia. The first exhibition introduces Topographical Prints of India from the 19th century. These aquatints and lithographs of landscape views (topos meaning place, and graphia, to see) were formative in creating an idea of India. This was true, not only in Britain, for example in London where many of the printmakers were based, but also in cities such as Madras (now Chennai) and Calcutta (now Kolkata). These images were used to create an imagined geography, allowing viewers a chance to envisage places they might not be able to visit in real life.